Butterfly Story is linked with three significant events: the first is the death of a particular Sherpa, the second is a meal in Switzerland, and the third is the Earthquake in Nepal 2015.

Norbu Sherpa has worked for years on the highest mountains in the Himalaya. Because of it, he got an opportunity to be part of the Swiss documentary “Sherpas the true heroes of Mount Everest.” But unfortunately, after many successful expeditions, he lost his best friend in the mountain. Thus, he realized the uncertainty of the climbing Sherpa’s life and the sorrow and struggles faced by the demise family, especially the wife and the kids.

A year later, Norbu Sherpa visited Switzerland. A friend graciously invited Andrea and Norbu for dinner in a marvelous restaurant. Norbu was astonished to see the price of his small meal. On the way back, Norbu explained to Andrea that, in Nepal, a kid could go to private school for a month for the price of this small meal.

On 25 April 2015, Andrea and Norbu were on their way to the Tibetan border to climb Mount Everest. All of a sudden, the earthquake struck, and rocks started to fall from everywhere. Due to the landslide and rocks on the road, they were stuck in the middle of nowhere.
They walked up to a nearby small village to ask for help, leaving their jeep in the middle of the rock falls. But they were shocked to see that the houses were collapsed and people were in panic. So for the next 5 days, they stayed in a cornfield and received rice and lentil soup from the family whose house was entirely collapsed. On the day of the rescue back to Kathmandu, Norbu wanted to give the family some money; but the family refused to take it. How can someone who lost everything still offer food to strangers for five days for free?
This event struck so much in Andrea and Norbu’s hearts that for the next two months, they helped earthquake victims instead of flying back to Switzerland.

This is how the Butterfly Help Project has started… 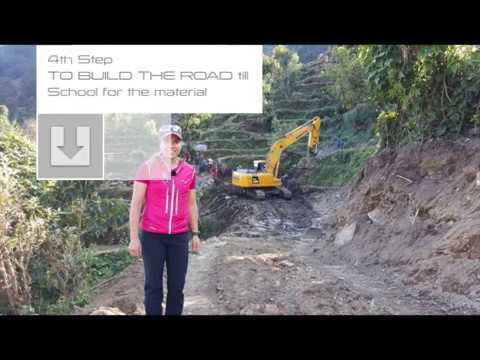